Last week has been a great week for me. I was required to find a GP to attach at his clinic. At first I was thinking about my dad, the lecturer agrees but last minute she says I can't attach with my father because it is unprofessional.

I have to really think her for not letting me attach with my dad, if not I will not be able to know such a great teacher. I attached with Dr Wong, which is also my father's friend. My dad gave me 2 names of the doctors and ask me to choose myself. I have no idea why I choose Dr Wong. Barely fate I guess.

On Monday I went to his clinic quite early, but he just came in at around 10 am. However, he really taught me a lot. He also use Murtagh with is also our reference for this Family Medicine posting. I was quite surprise actually. Everyday I will have homework to do, things I need to read up. Of course, from the cases I saw from his clinic and some basic things. Luckily I am quite hardworking that particular week. If not I will embarrassed myself if I can't answer some simple question that he asked.

I think we both get into each other very well. Its more like a father daughter thing. He is a great mentor and teacher and I do admire him. There are thought that people my age or people around me will not have. I have learn a lot during the attachment as well. How he approach his patients and how he did patient education. How the patients tell him their personal problems and how he is able to dig up stuff that people want to hide. It has been so fun and interesting.

He actually inspired me and I don't feel hard to study during the attachment, like I am not forced to study. Other than study, we also discussed a lot of other things like politics, religion and family.

He does not have any children of himself but he adopted 5 children, regardless of race or religion. His 2 youngest son is Indian yet he love them so much like his own son. He is a devoted Christian and he respect people believes as well. Every religion teach people good things. I always remember him saying 'one man women and one women men'. Meaning he is the man who only have 1 women which is his own wife.

He has less patient nowadays because he is into politics and he told me how he got involved with it. We have the same point of view about the politics. I believe he will be a good leader.

Thank you very much Dr Wong! 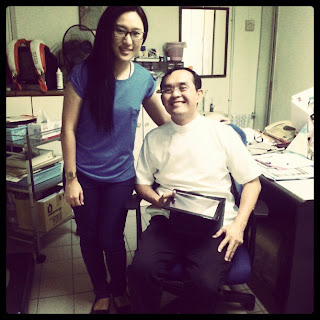 A medical doctor.
An activist for the poor and oppressed.
A patriot fighting to save the country from going bankrupt.
A father adopting many children.
A man who unlocks God from church.
A man who walks with God.
When one sees his imperfection, one sees God's perfection.

adopted from my father- Stanley Ting

Email ThisBlogThis!Share to TwitterShare to FacebookShare to Pinterest
Labels: medical, my feelings

i might be too sensitive over little matter but i really hope my good friends don't treat me that way.
my world is really small enough to have just a few permanent friends around and i really afraid and worry of losing anyone anymore. yet not everyone understand me.
i understand that due to my study and work, i might not have time to spent with them, thus making me reject and decline in some of their invitation in their life. seem like few times later, they don't even bother to invite me anymore.
its kinda of disappointed when feel left out. so close yet so far. when i suggested some activities, they will give sort of reasons. then later i'll find out they are doing the activities i suggested before.
timing problem? so when i suggested its not the right time. but later, its the right time for them but not for me.
so... when is the right timing?

Email ThisBlogThis!Share to TwitterShare to FacebookShare to Pinterest
Labels: my feelings

i am currently in GP posting in Melaka during the week of 2 public holiday. thank goodness I am able to do it at my hometown. well, it wasn't easy at all. so much of up and down 1 week before this. i wish i don't need to mention but i want to.

bitch A is trying to please a professional and then keep changing her face between me and Pro. so end up the professional acting not so professional and start the blaming game even before finding out the truth. finally she realize its just an misunderstanding yet my name and reputation is affected. what a bitch and a unprofessional professional.

I find it really interesting to attach with Dr Wong. He is quite up to date and he also use the same book we are using in family medicine. I can see his office is paste up with PROMPT and also he use SNAP in patient education. I was very surprise to see that because I always think that GPs will have their own way of doing their things. But Dr Wong is following the current trend and recommendation, which help me learn a lot from him.

This is only the first day and my brain is already full of things. Wanted to study yet so lazy. I just study some of it. I wish I am more hardworking but I am not. I am just who I am.


Bitch will always be bitch. my friend ask why don't i confront her. if she was me she will already slap onto her face. well, i don't even went to pollute my hand with her face. just like what i wrote in my fb status. what an asshole face fullstop!
Posted by bluestarstsl at 11/12/2012 10:58:00 PM No comments:


a girl that like blue,
i live my life with my true heart,
but always get hurt,
like to laugh and cry.
just like blue stars,
they have cold appearance,
but they have the highest temperature among the stars.

Translate to English (About)